I bought some IV-12 VFD tubes from Dimitri on Ebay. They languished a while. Then, I went to Mountain View’s Computer Museum and saw the brilliant IBM/360 operator console. A light for each bit in a register, a big dial to “RUN/STOP/STEP”, breakpoints on address/data using tri-state 0/1/dontcare switches, the lot. I wanted one as a GDB frontend. I was doing a lot of stuff with virtual machines in them thar days & wanted something a bit real on them.

I built this initially to be a kind of debug console attached to a computer (e.g. read out a virt machine’s (32bit) PC). It actually has a USB port (to use the V-USB stack), but that didn’t work reliably & I got bored of hacking it.

So, this is a piece of art. It sits and quietly increments a random digit of the hexadecimal display (carrying over as appropriate).

“RLUT, Matt Evans, 2008: Exploring the passage of time in conjunction with a number system not usual to the layperson, this work challenges the expectations of the viewer and insinuates itself upon the natural order most take for granted. Uplifting, accessible and somewhat inspiring, we are taken on a voyage — through hexadecimal — bringing us finally back to where we started, except now admiring the rusty steel and glass a bit more.”

A bonkers amount of work. It’s priceless art, as I’m never doing it again. I didn’t have any sockets for the IV-12 tubes, and couldn’t find any (10 pins on an 11-pin base). So I made my own pins from pins stripped from an ATX PSU motherboard connector, with a big knife, removed the wire, crimped & soldered onto a PCB pin, and heatshrinked. As if I wasn’t bored after 80 of them, I then had the PCBs to make (kitchen, acid and peroxide). Then drill. 80 holes, in the right places.

It’s based on an ATmega48, with a boost converter driven from its PWM to generate the roughly-80V to drive the tubes. An analog input closes the feedback loop, regulating the tube supply. (Sample the voltage periodically. If the voltage is too high, slow down the PWM. If it’s too low, speed it up.) The digit to increment is chosen from a random value seeded from this feedback loop.

The case is 0.5mm sheet steel, hand formed into a two-piece mating tub shape. It has a dymo label stuck on it. One of the clicky-clicky kind, rather than the printy-printy kind.

The tubes are lovely, all slightly different. Are they at least partially handmade? The glasswork is uneven, it doesn’t look machine-sealed. The datecode on the back puts them from 1988… 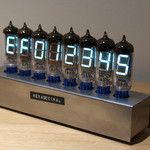 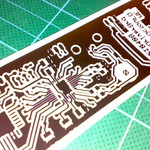 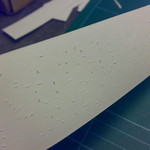 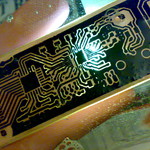 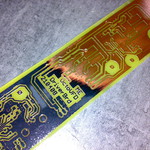 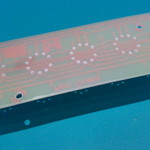 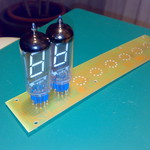 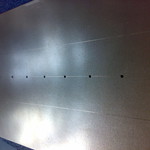 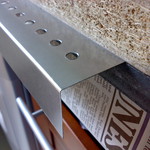 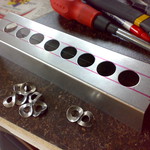 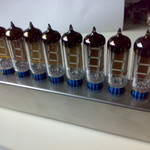 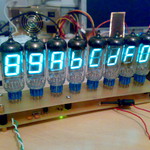 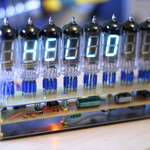 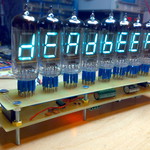 No case, but working 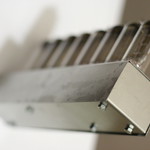 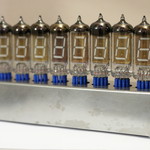 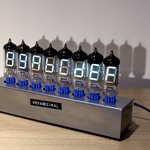 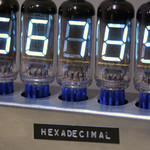 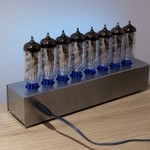 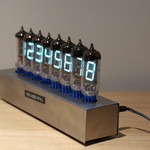