I’ve always wanted an Apple Macintosh SE/30. Released in 1989, they look quite a lot like the other members of the original “compact Mac” series, but pack in a ton of interesting features that the other compact Macs don’t have.

This is the story of my journey to getting to the point of owning a working Mac SE/30, which turns out not to be as simple as just buying one. Stay tuned for tales of debugging and its repair.

So, the Mac. Check it out, with the all-in-one-style 9” monochrome display:

Look, I wouldn’t normally condone use of CISC machines (and – unpopular opinion – I’m not actually a 68K fan :D ), but not only has this machine a bunch of capability RAM-wise and CPU-wise, but this machine has an MMU. In my book, MMUs make things interesting (as well as ‘interesting’). Unlike all the other compact Macs, this one can run real operating systems like BSD, and Linux. And, I needed to experience A/UX first-hand.

Unpopular opinion #2: I don’t really like ye olde Mac OS/System 7 either! :) It was very cool at the time, and made long-lasting innovations, but lack of memory protection or preemptive scheduling made it a little delicate. At the time, as a kid, it was frustrating that there was no CLI, or any way to mess around and program them without expensive developer tools – so I gravitated to the Acorn Archimedes machines, and RISC OS (coincidentally with the same delicate OS drawbacks), which were much more accessible programming-wise.

Anyway, one week during one of the 2020 lockdowns I was reminded of the SE/30, and got a bit obsessed with getting hold of one. I was thinking about them at 2am (when I wasn’t stressing about things like work), planning which OSes to try out, which upgrades to make, how to network it, etc.

Took myself to that overpriced auction site, and bought one from a nearby seller.

I picked it up.

I was so excited.

It was a good deal (hollow laugh from future-Matt), as it came in a shoulder bag and included mouse/keyboard, an external SCSI drive and various cables.

Getting it into the car, I noticed an OMINOUS GRITTY SLIDING SOUND.

Oh, did I mention that these machines are practically guaranteed to self-destruct because either the on-board electrolytic caps ooze out gross stuff, or the on-board Varta lithium battery poos its plentiful and corrosive contents over the logic board?

[If you own one of these machines or, let’s face it, any machine from this era, go right now and remove the batteries if you haven’t already! Go on, it’s important. (I’m also looking at you, Acorn RISC PC owners.) I’ll wait.]

I opened up the machine, and the first small clue appeared: 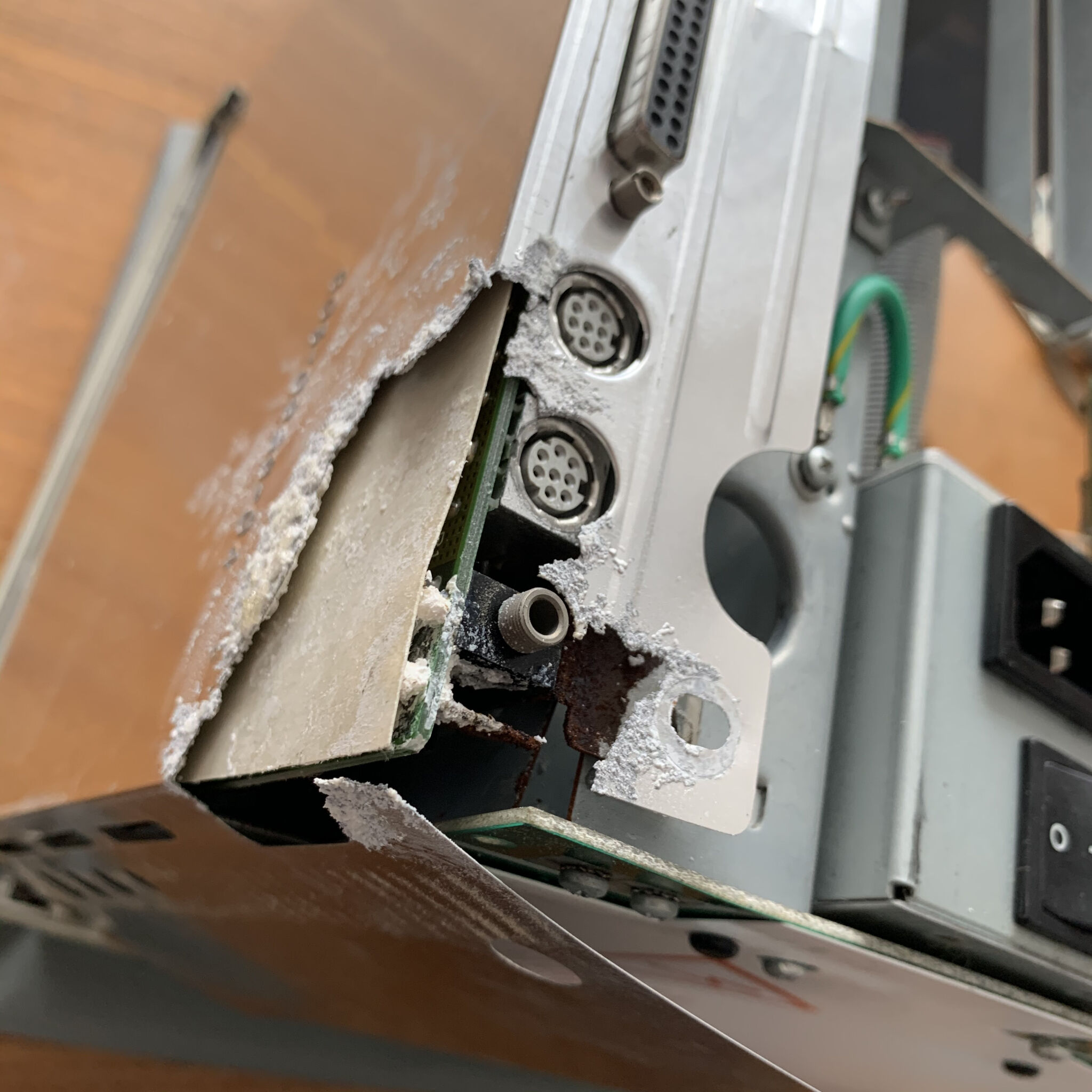 Matt, with strained optimism: “But maybe the logic board will be okay!” 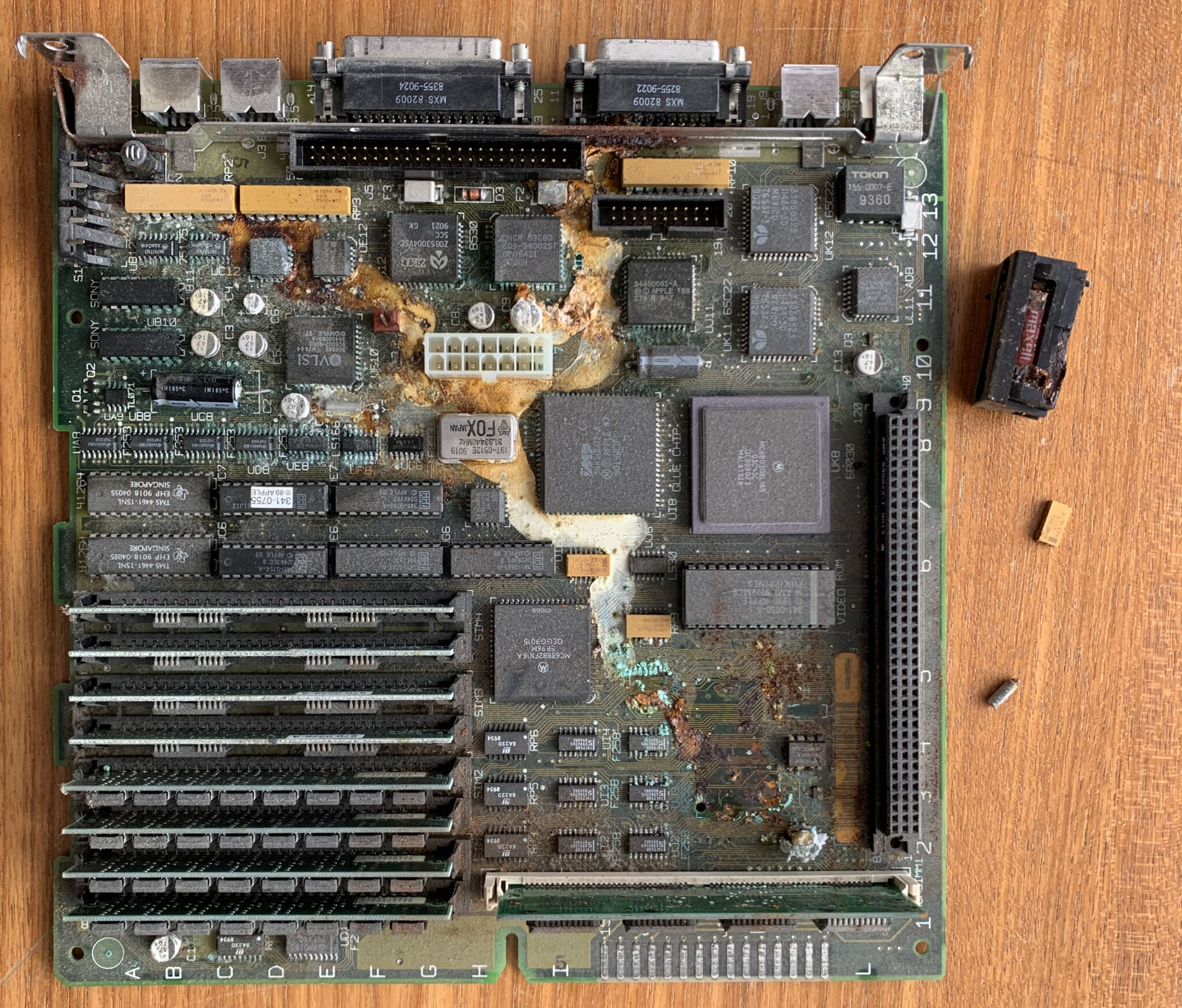 At this point I’d like to say that the seller was a volunteer selling donated items from a charity shop, and it was clear they didn’t really know much about the machine. It was disappointing, but the money paid for this one is just a charitable donation and I’m happy at that. (If it were a private seller taking money for a machine that sounded like it washed up on a beach, it’d be a different level of fury.)

Undeterred (give it up, Matt, come on), I spent a weekend trying to resurrect it. Much of the gross stuff washed off, bathing it in a sequence of detergents/vinegar/IPA/etc: 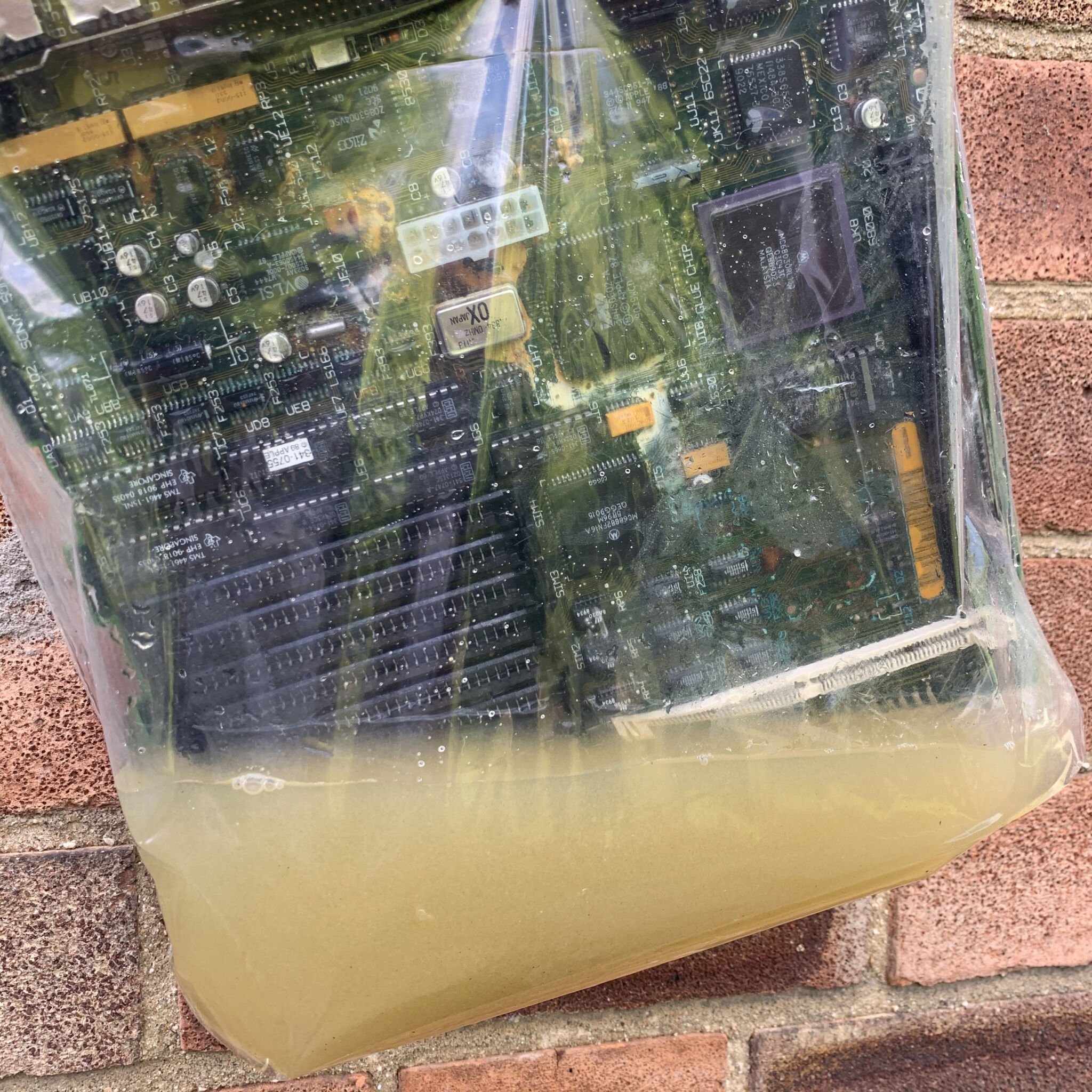 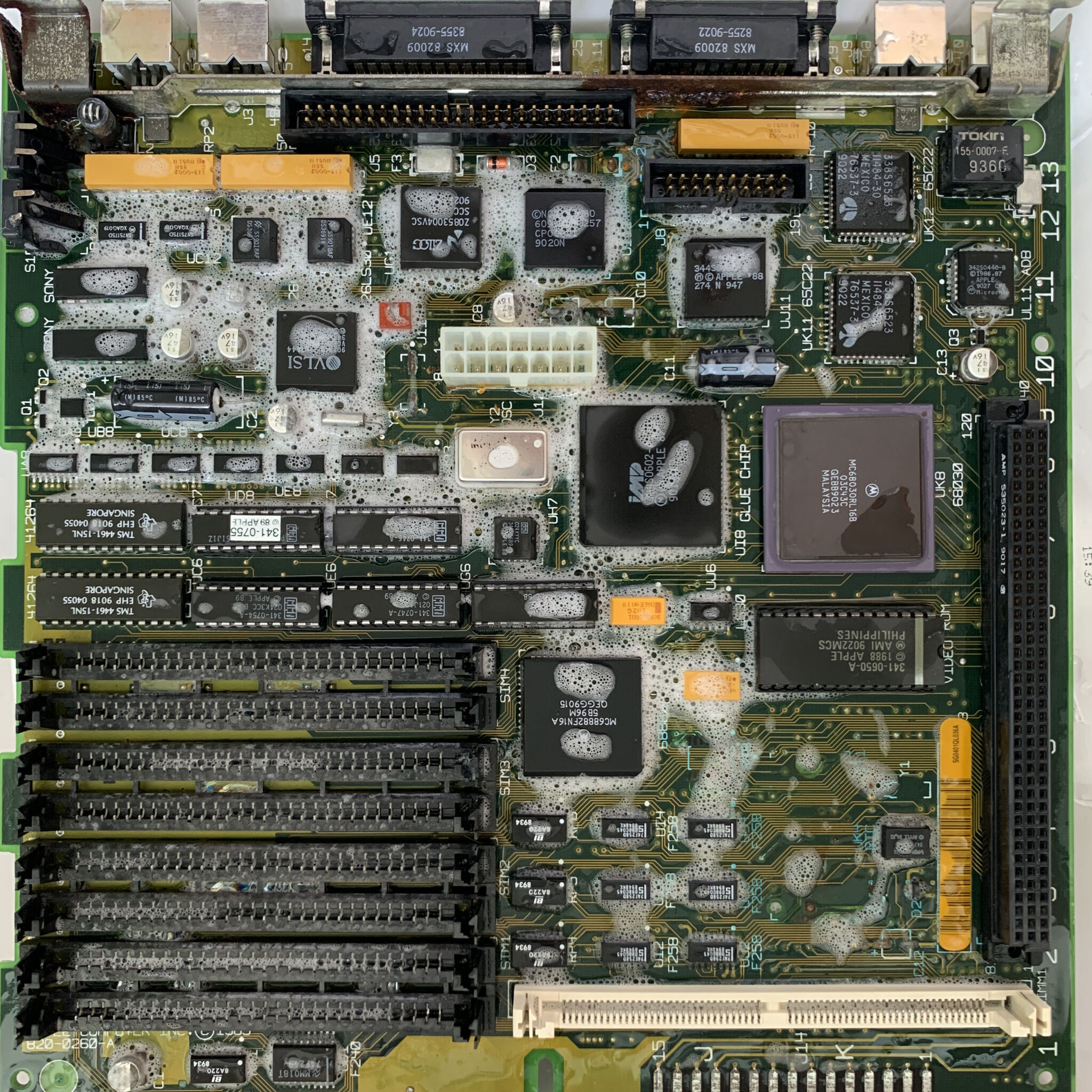 You can see some green discolouring of the silkscreen in the bottom right.

Submerged in (distilled) water, you can see a number of tracks that vanish halfway, or have disappeared completely. Or, components whose pads and leads have been destroyed! The battery chemicals are very ingenious; they don’t just wash like lava across the board and destroy the top, but they also wick down into the vias and capillary action seems to draw them into the inner layers.

Poring over schematics and beeping out connections, I started airwiring the broken tracks (absolutely determined to get this machine running, as though some perverse challenge).

But, once I found broken tracks on the inner layers, it moved from perverse to Sisyphean because I couldn’t just see where the damage was: wouldn’t even finding the broken tracks by beeping out all connections be O(intractible)?

Making the best decision so far in the odyssey, I gave up and searched for another SE/30. At least I got a spare keyboard and mouse out of it. But also, a spare enclosure/CRT/analog board, etc., which will be super-useful in a few paragraphs.

Meet the new Mac, same as the old Mac

I found someone selling one who happeend to be in the same city (and it turns out, we even worked for the same company – city like village). This one was advertised as having been ‘professionally re-capped’, and came loaded: 128MB of RAM, and a sought-after Ethernet card. Perfecto! 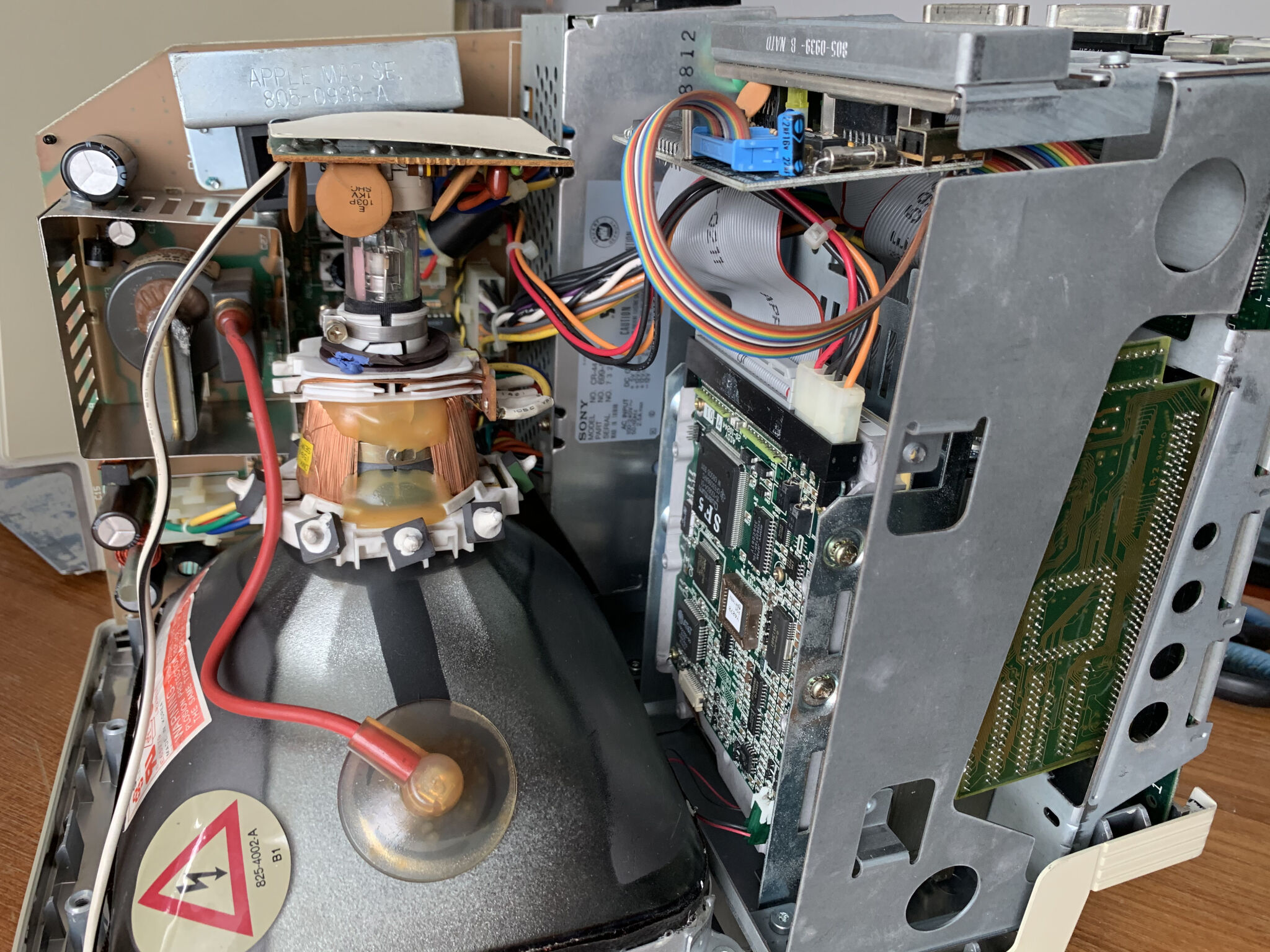 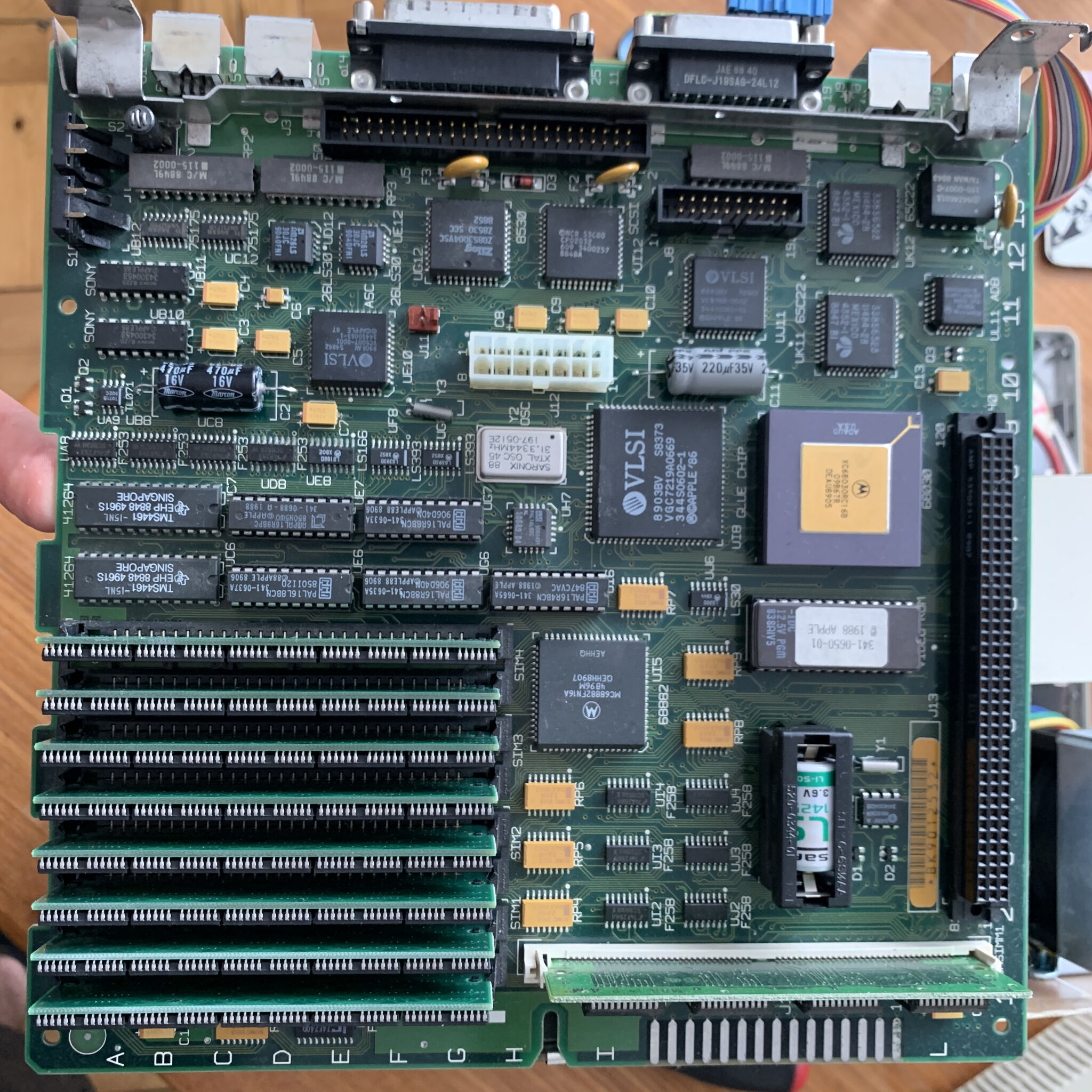 Paranoid me immediately took it apart to check the re-capping and battery. :) Whilst there was a teeny bit of evidence of prior capacitor-leakage, it was really clean for a 31 year old machine and I was really pleased with it. The re-capping job looked sensible, check. The battery looked new, but I’m taking no chances this time and pulled it out.

I had a good 2 hours merrily pissing about doing the kinds of things you do with a new old computer, setting up networking and getting some utilities copied over, such as a Telnet client:

After the two hour happiness timer expired, the machine stopped working. Here’s what it did: 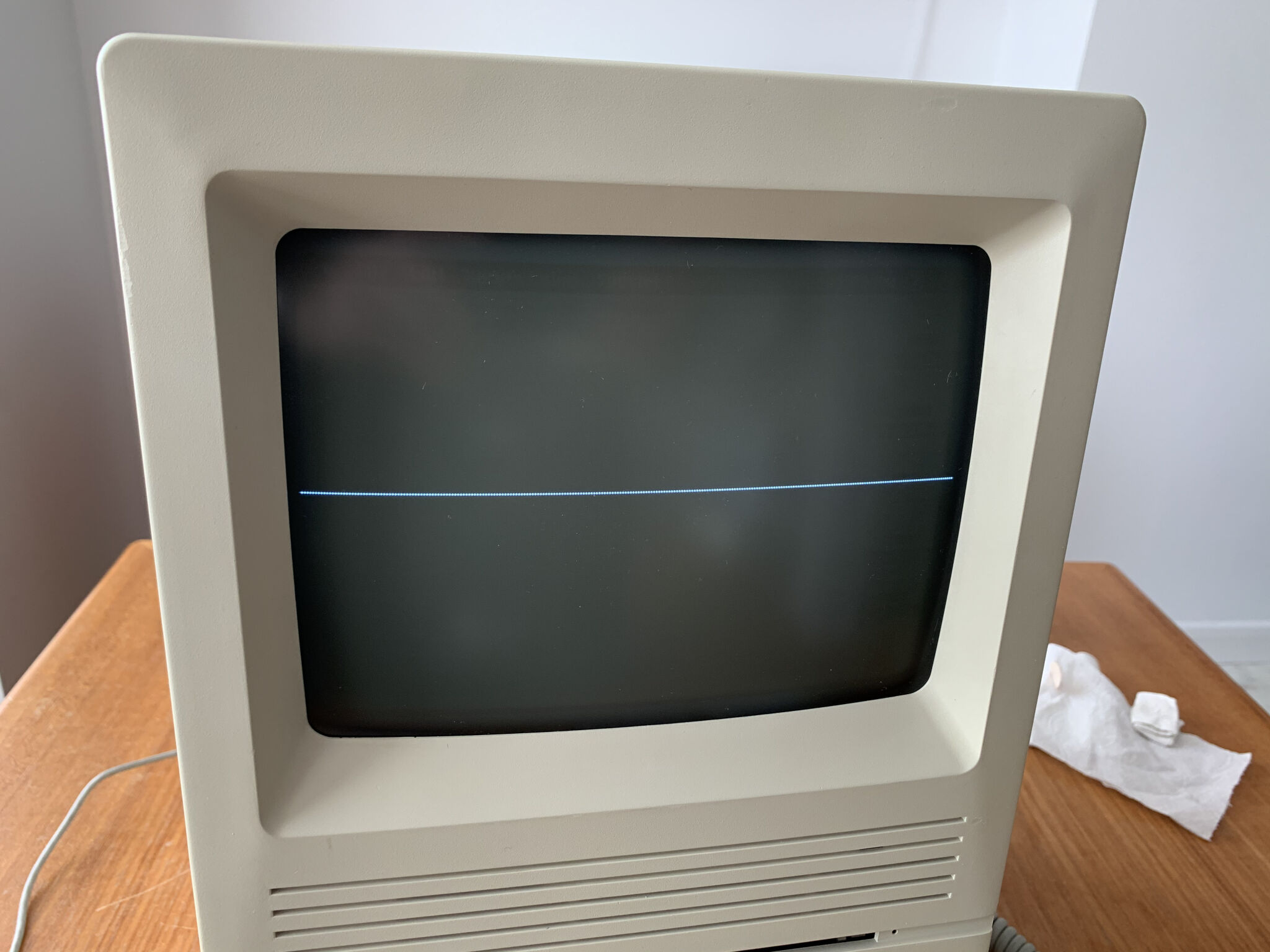 Otherwise, the Mac made the startup “bong” sound, so the logic board was alive, just unhappy video.

I think we’re thinking the same thing: the CRT’s Y-deflection circuit is obviously broken. This family of Macs have a common fault where solder joints on the Analogue board crack, or the drive transistor fails. The excellent “Dead Mac Scrolls” book covers common faults, and fixes.

But, remember the first Mac: the logic board was a gonner, but the Analog board/CRT seemed good. I could just swap the logic board over, and I’ve got a working Mac again and can watch the end of Telnet Star Wars.

It did exactly the same thing! Bollocks, the problem was on the logic board.

We were both wrong: it wasn’t the Y-deflection circuit for the CRT. The symptoms of that would be that the CRT scans, but all lines get compressed and overdrawn along the centre – no deflection creating one super-bright line in the centre.

That’s interesting because it’s clearly not being overdrawn; multiple lines merged together would overlay even/odd odd/even pixels and come out solid white. The line also doesn’t provide any of the “happy Mac” icon in the middle, so it isn’t one of the centre lines of the framebuffer.

If you’ve an SE/30 (or a Classic/Plus/128/512 etc.) logic board on a workbench, they’re easy enough to power up without the Analog board/CRT but be aware the /RESET circuitry is a little funky. Reset is generated by the sound chip (…obviously) which requires both +5V and +12V to come out of reset, so you’ll need a dual-rail bench supply. I’d also recommend plugging headphones in, so you can hear the boot chime (or lack of) as you tinker. Note the audio amp technically requires -5V too, but with +5V alone you should still be able to hear something.

This generation of machines are one of the last to have significant subsystems still being implemented as multi-chip sections. It’s quite instructive to follow along in the schematic: the SE/30 video system is a cluster of discrete X and Y pixel counters which generate addresses into VRAM (which spits out pixels). Some PALs generate VRAM addresses/strobes/refresh, and video syncs.

Working backwards, I traced VSYNC from the connector to PAL UG6. It wasn’t simply a broken trace, UG6 wasn’t generating it. UG6 appears to be a comparator that generates vertical timing strobes when the Y line count VADR[7:0] reaches certain lines.

The Y line count is generated from a dual hex counter, UF8.

The UF8 counter is clocked/incremented by the TWOLINE signal output from PAL UG7.

*Something is shorting the TWOLINE signal to a power rail.

Here’s how the clues correspond to the observations:

We can work with this. TWOLINE is shorted somehow. Tracing it across the PCB, every part of the trace looked fine, except I couldn’t see the part that ran underneath C7 (one of the originally-electrolytic caps replaced with a tantalum). I removed C7: 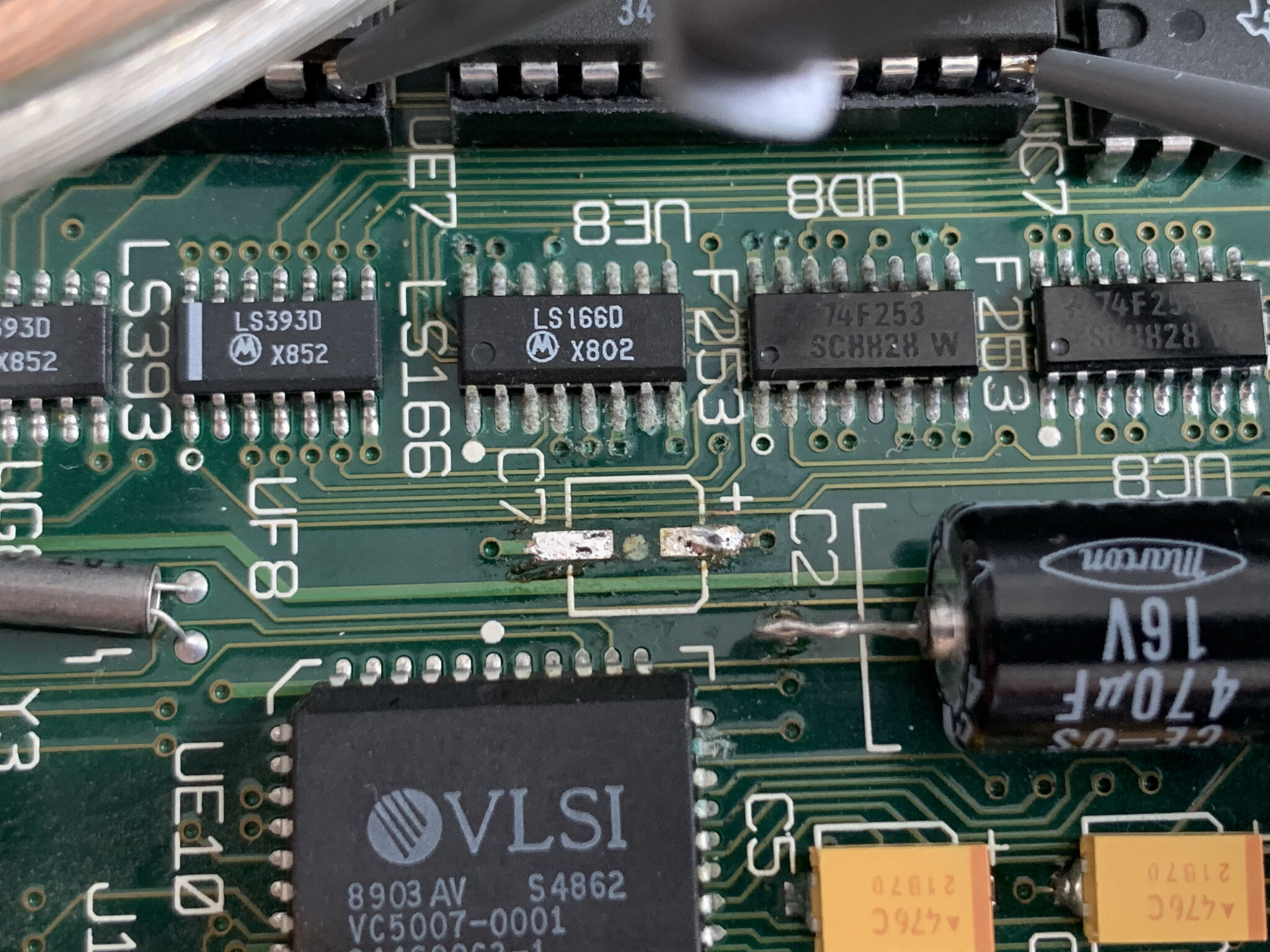 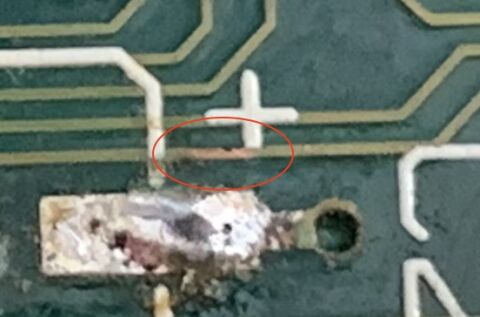 How about now? A tiny amount of soldermask has come off the track just south of the silkscreen ‘+’. This was Very Close to the capacitor’s contact, and was shorting against it! Above I thought it was shorting to ground: it’s shorting to +5V (which, when you measure it might be a low number of ohms to ground).

My theory is that it wasn’t completely contacting, or wasn’t making a good connection, and that the heat from my 2-hour joyride expanded the material such that it made good contact.

You can see that there’s some tarnish on the IC above C7 – this is damage from the previous C7 leaking. This, or the re-capping job, lifted the insulating soldermask leading to the short.

The fix was simple, add some insulation using kapton tape and replace the capacitor:

After that, I could see VSYNC being produced! But would it work?

Time to put it all back together, trying not to touch or break the CRT. 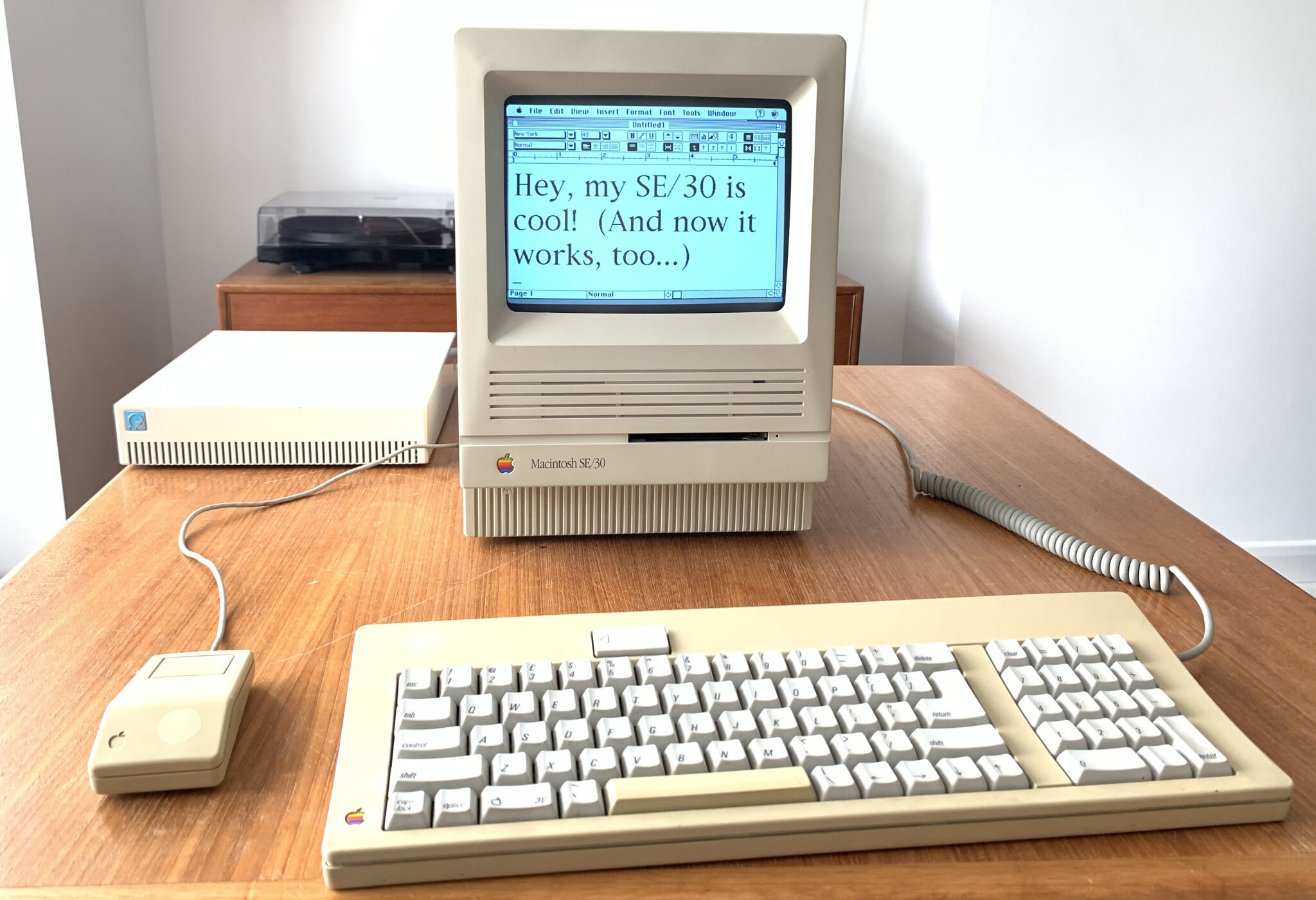 And now for something completely different, but eerily familiar

I mentioned I wanted this particular model because it could run “interesting OSes”. Did you know that, way before NeXT and OS X, Apple was a UNIX vendor? 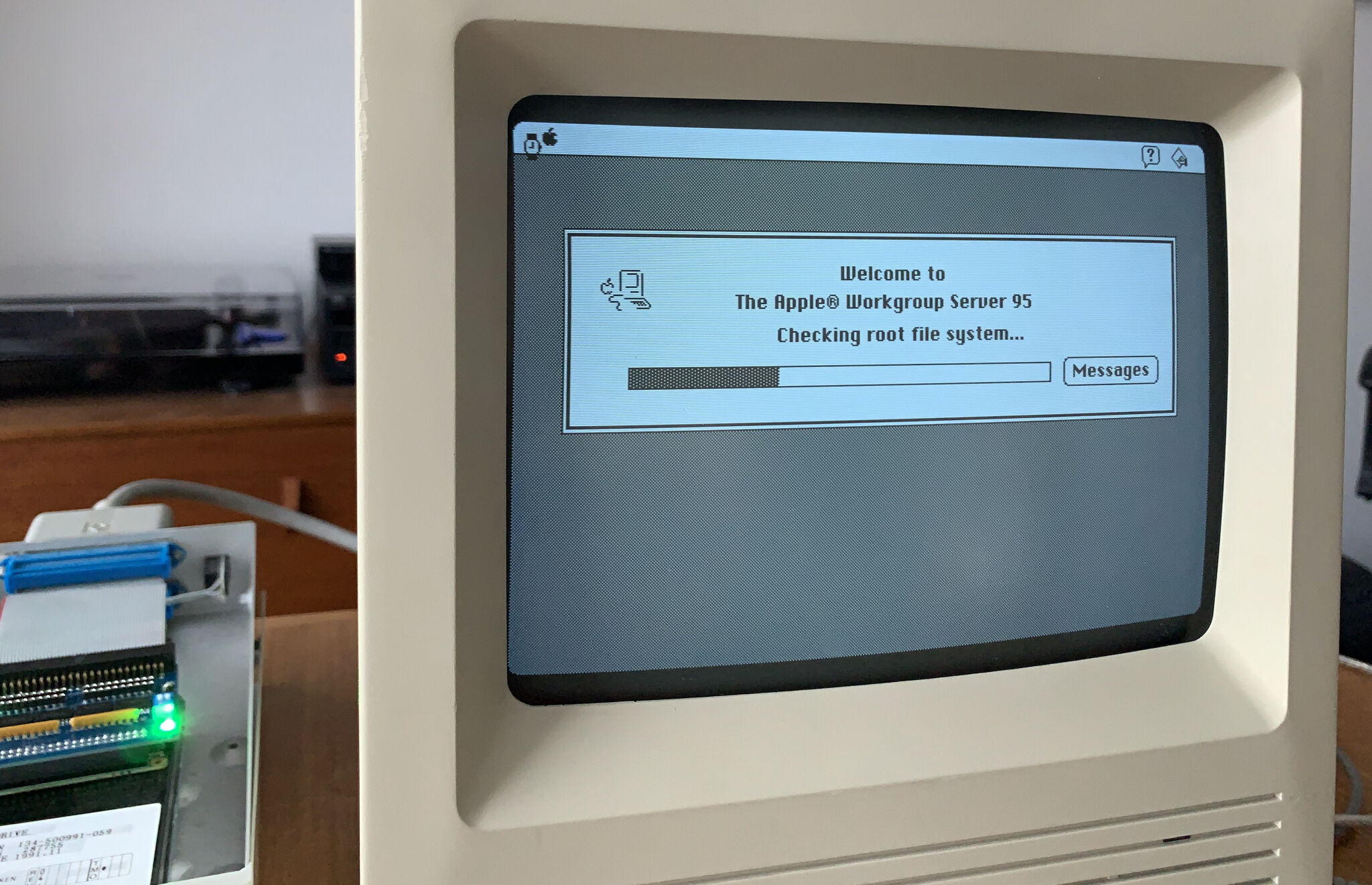 I’ve always wanted to play with Apple’s A/UX. By version 3.1, it had a very highly-integrated Mac OS ‘Classic’ GUI running on a real UNIX.

It’s not X11 (though an X server is available), it really is running the Mac Toolbox etc., and it seems to have some similarities with the later OS X Blue Box/Classic environment in that it runs portions of Mac OS as a UNIX process. In the same way as OS X + Blue Box, A/UX will run unmodified Mac OS applications. The Finder is integrated with the UNIX filesystems in both directions (i.e. from a shell you can manipulate Mac files).

As an OS geek, I’m really impressed with the level of integration between the two OSes! It’s very thorough. Since the usual UNIX development tools are available, there’s a bit of cognitive dissonance of being able to “program a Mac” right out of the box:

I mean, not just building normal UNIX command-line apps with cc/make etc., but the development examples include Mac OS GUI apps as well! It’s truly living in the future™.

Playing with ancient machines and multiple OSes is pretty painful when using ancient SCSI discs because:

I built a RASCSI adapter (write-up and PCB posting TBD), software and circuit originally by GIMONS. This is a Raspberry Pi adapter that allows a userspace program to bit-bang the SCSI-I protocol, serving emulated disc/CD-ROM images from SD card. It works beautifully on the SE/30, and lets it both have several discs present at once, and switch between images quickly.