I’d been looking for a slide projector for a while, as I wanted to put a monochrome Nokia LCD in it to see how it looked. Angus found this excellent vintage projector in a skip at the ANU! Big thanks to him.

The slide projector was a ‘manual’ no-auto-feeding-carousel type, so was perfectly minimal and looks really cool. Sort of like a killer robot anteater. My guess is that it dates from the 1950s. It had a fabric-covered mains cable, bakelite plug/lamp socket, and a crazy nice tubular 250W bulb. I removed all this…

Then I tried to clean 50 years of gunk off the lenses (with only partial success) then popped an LED, a microcontroller and an LCD in it.

Here’s what it now features:

The images within are some mono posterised drawings of such luminaries as Che [Edit– not entirely serious here :P], Hendrix, some Space Invaders (static, unfortunately) and various hairdo outlines so you can stand against the wall and see what you look like with Cleopatra hair or a massive afro. This is clearly the pinnacle of modern technology.

It’s not super-bright in workshop lighting, but clearly visible in a 60W incandescent-lit room and very bright in the dark. I rate it “B-, could be better, could be much worse”.

I didn’t draw one, sorry. Instead let me present it to you via the CAD package called “English”:

The circuit is powered off a 5V supply; the fan and LED circuits are supplied directly. The ATmega88, IR sensor and LCD run from a 3.3V regulator off the 5V rail. The AVR has a crystal on it as per usual AVR circuits. There are some pins to ISP-program the AVR. The fan’s driven from PD7 using a little NPN transistor. The LED’s driven at about 3.5V (at about 3W) using the MOSFET/BJT/current-sense resistor circuit mentioned above, controlled by AVR pin PB1. The IR demodulator’s output is fed to PB2 which uses a pin-change IRQ in conjunction with Timer1 to decode the IR pulse train in JVC/Daewoo format. Finally, the LCD is bit-banged directly from the AVR pins, /RESET, DATA, CLK and /CS. There’s a green debug LED too.

Firmware C source/Makefile (for use with AVR GCC and avrlibc) can be found here: bitmapprojector-1.0.tar.gz

GPL-licenced, it may not be useful as-is unless you clone this circuit, but will I hope be useful to those tinkering with these Nokia 1200 LCDs or wanting to decode JVC/Daewoo format remote controls. 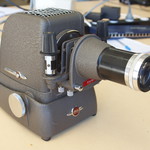 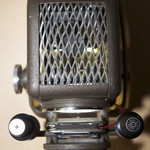 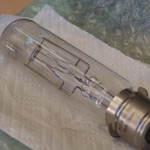 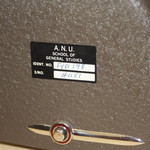 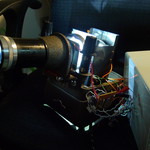 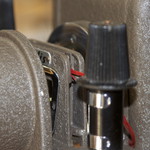 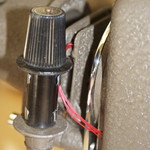 30awg wires between LCD and controller 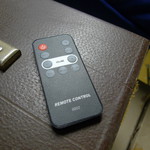 With remote control at your fingertips 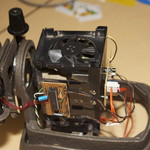 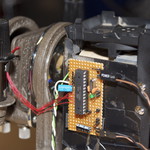 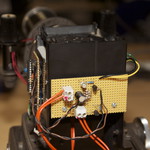 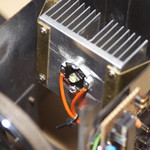 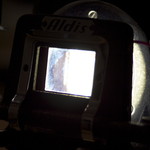 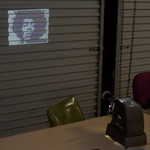 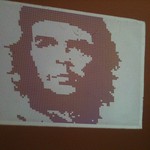 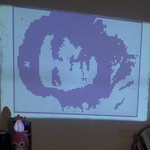 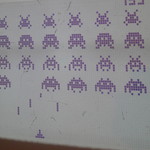